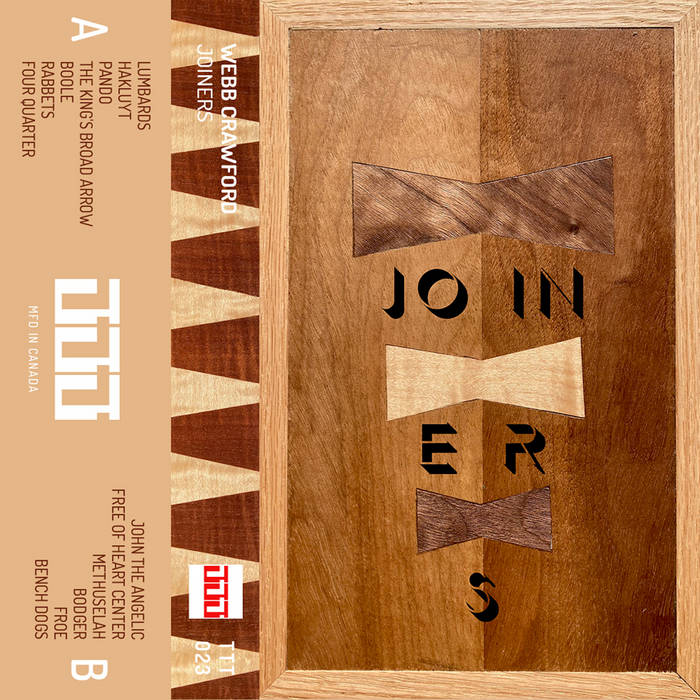 SOLD OUT AT SOURCE

A joiner is an artisan, a fine craftsperson who works in the tradition of ‘joinery,’ or the process of cutting pieces of wood so that they fit tightly together without the use of glue or other adhesives; a joiner pieces wood together to create something that is (hopefully) synergistic; a joiner forges, if not by some kind-of magic, a distance between the lumber they use and the trees that it comes from, blurring the line between what is natural and crafted.

‘Joiners’ is the debut release from guitarist, improviser, and instrument builder Webb Crawford. It is a collection of solo guitar improvisations that draw upon the unique instrumental language they have been developing over the past few years, a portrait of the singular creative voice they have honed thus far. It is an essentially ‘guitaristic’ work, not one that is anxious to be comprehensive or impressive in any ‘technical’ capacity, but one that is fundamentally centered around the guitar, that begins with the instrument itself as its object of inquiry. It is a line of inquiry that isn’t just historico-aesthetic in scope, aiming to trace something of a cultural lineage of the instrument, but more fundamentally one that is concerned with its materiality—the guitar as a living and breathing technology, itself a joined and wooden machinery.

Webb’s experience as a luthier and woodworker is a fact that leaves its trace embedded in all aspects of their work. On the most visible level, the track titles on ‘Joiners’ all make reference to various technical and historical aspects of joinery that fascinate Webb. “Hakluyt” is an address of its eponymous figure, Richard Hakluyt, an English propagandist who advocated for the colonization of North America, mostly as a means to accumulate natural resources, and in doing so, helped solidify the relationship between ecocide and the American lumber industry. “Free of Heart Center” refers to lumber that has been processed to remove its pith (i.e., its “heart center”), which is structurally the weakest part of the board, despite it being the original stem, the point from which the tree first started growing. (The piece which remains after FOHC boards have been milled is called ‘boxed heart’ lumber, which is made up of the pith and its surrounding materials, and which tends to be sold at a lower price for this reason.) “Four Quarter” is one example of the specialized language used in a lumberyard, in this case referring to a measurement adding up to ‘four quarter inches,’ or one inch.

‘Joiners’ is the product of a veritable fascination and genuine engagement with the guitar and the craft of joinery. In Webb’s own words: “I feel love when I hold my instrument. I marvel at the complexity of its existence and its creation. An instrument’s existence is a reflection of the joinery which unites all things.”

It bears mentioning a fundamental principle of sound: sound does not disappear—it resonates, it lingers. It is never ‘one,’ but ‘more than one,’ always only existing in dialogue with another, its desire being not only to sound, but to re-sound. ‘Joiners’ is, architecturally, a constellation of sounds that shift from foreground to background, that opt for the amorphous and contemplative rather than the teleological. It proffers, like sound itself, that the possibility of multiplicity, generosity, and togetherness is one worth striving towards.

Webb Crawford is an improviser, woodworker and instrument-builder. They like playing free-improvised music, Piedmont-style fingerpicking, and percussive/noisy stuff. They have built stringed instruments ranging from electric guitars, basses and mandolins to modern reconstructions of historical instruments and instruments made from recycled materials or found objects. They apprenticed with Mamie Minch & Chloe Swantner at the Brooklyn Lutherie, and built electric guitars and basses at Subway Guitars in Berkeley, CA. In 2017, they worked with the Massachusetts Museum of Contemporary Art to restore the instruments of Gunnar Schonbeck as part of a playable interactive exhibit. They completed an MA in Experimental Music/Composition at Wesleyan University in June, 2021. 'Joiners' marks their debut solo release.