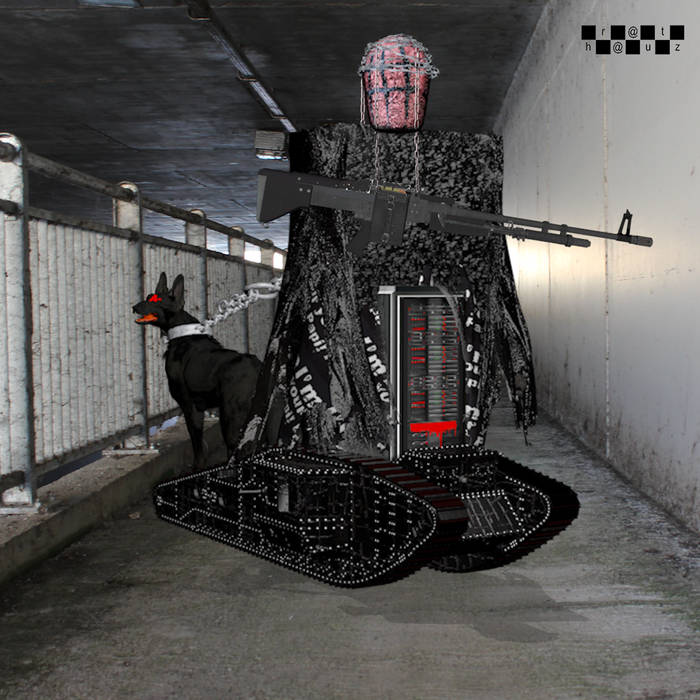 "‘Erect, rechargeable intelligent machine with organic dog’ – that’s not your weirdo neighbour, it’s the humanoid ‘M.E.R.I.C.O.O.’ gracing the cover of rathauz’ new record: ciccio bomba cannoniere. This awful contender looks like Sir Killalot’s hard older brother, complete with a cyclops doberman. He’s got a kebab for a head, he’s clutching a weapon, and he’s accessorised with a fetching crown of barbed wire. The LP he’s guarding for the Venetian techno-trap-thrashers is unpretentious, confrontational, and compulsive.

In the electronic tracks that kick the album off, there are a few different skeletons that rathauz costume in their video-nasty sonics. ‘Stahlwerk’ is a frantic 140 techno workout, while ‘NUDNC’ brings the tempo down to emphasise a malevolent horror-house groove. Jabbering acid lines chat away with what sounds like a circuit-bent Tickle-Me-Elmo being stamped on repeatedly to deliver a chilling, robotic suffer-rap.

This grizzly second half is where the vocal performances come into their own. Early in the record they’re ominous – spooky even – but as the album progresses with a more fuzzed-up bite for backup they’re a commanding presence.

‘Venetia-monitor’s guitar line feels like a riff illicitly drained from Nirvana’s Nevermind with a giant needle, transmogrified into MIDI, and played back through a stack of bargain bin flangers. Like Nirvana, rathauz use contrasting dynamics effectively – even if their ‘quiet’ sections are punctuated with samples of human screams and heckling crows.

To conclude this review I’ll make like Pete Seeger and ask: which side are you on? Thrash-metal rebels or despicable techno punters? Either way, one toe out of line and you’ll face a disciplinary from the terrible gent and his one-eyed dog."