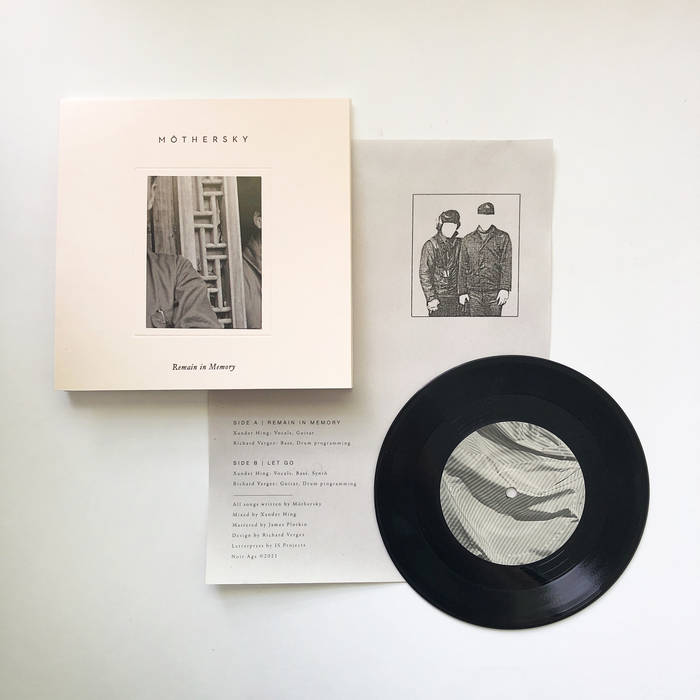 Remain in Memory
by Möthersky

Edition of 200 numbered records, each housed in a custom Rosy womb French paper jacket with letterpress + a unique hand-cut found photo memory fragment on each cover with newsprint insert. Every copy has a different cover.

Letterpress by IS Projects
Blank recycled jackets from Middle Press

I never was in a punk band. Began music by making slow-paced space racket, solo with old tape loops around 2005. Then Möthersky was conceived, starting as a solo instrumental project but evolving into duos, trios, and duos again with a more rhythmic, post-punk approach plus an obvious nod to krautrock structures. And still retaining an electroacoustic murkiness.

Whilst living in NY, a kindred spirit in the form of Xander Hing joined the project as a vocalist and co-conspirator. Pre-jaded NYC lifeforms. An amicable duo of sonic decision makers. Xander, originally a South African native, transplanted to Edinburgh, then eventually Brooklyn. Mutual qualms informed by city stress. Fruitful studio sessions inside a Lower Eastside basement resulting in the 2015 tape release “Our Secrets,” which also spawned the track Let Go, features here as the B-side. Musings on stuff like HTRK, The Pop Group, 90’s hip-hop, and Gang of Four or Wire. We got on like a trashcan on fire.

We’d switch up instrument duties, but I never really sang anything. We played a few gigs: our first at the Nothing Changes party in Manhattan. Then an accidental string of gigs playing support for a few different notables: Cindytalk, Black Rain, Eric Random, Das Ding, Drew McDowall, Interval.

This is an archival recording, recollecting a time and place, pressed to 7 inch vinyl. Also features a freshly recorded digital bonus track:
What Have We Done (Senzeni Na)

Special thanks to Möthersky alumni:
Kelvin Mitchell and Raphael Alvarez