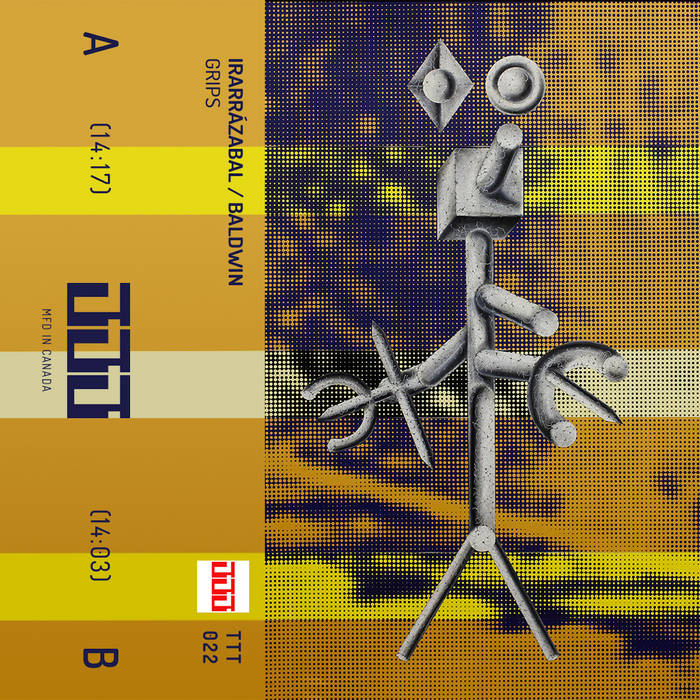 Grips documents a live performance and the first-time meeting between double bassists Amanda Irarrázabal (Chile) and Nat Baldwin (US). The show was organized by promoter Jessica Hallock of NYC Noise, aligning with a week of performances for Irarrázabal in NYC before attending a residency at Art Omi. The duo exchanged just a brief introduction before show time, yet as soon as they hit the stage, they interacted with the comfort and ease of long-time collaborators. The set ranges from bursts of active interplay to delicate layers of drone, always expressing the flow of propulsive motion, while leaving the necessary space for subtle details to emerge. Both Irarrázabal and Baldwin have each honed their own distinct techniques over the years, traversing an array of stylistic experience. Grips displays their singular voices unified by a focused intensity and executed with unwavering, palpable joy.

Born in Santiago de Chile in 1982, Amanda Irarrázabal has lived and been part of the music scene in Buenos Aires and Mexico City. She currently resides in Santiago de Chile.
She is a double-bass player, vocalist, improviser and composer. Her work is based on the experimentation and the search of an own language, with a great attraction to the world of the sounds, crossing different forms and musical genres, deciding not to settle down in any of these.
She has played with musicians of different countries and ages and she is currently part of projects such as Los Piures (Mx), with Don Malfon, Carlos Alegre and Miguel Francisco, the Ahsim Skram Triteto (Mx), with M. Marks and Gibrán Andrade, Cátodo Dúo (Ch), with Ramiro Molina, with Miriam Den Boer Salmón (Nd).
And from her project CAUDAL; solo set consisting of their own experimental songs accompanied by the double bass, processes and modular synthesizers, which mix song, poetry and free improvisation.
She has been presented in different venues, theaters and festivals in Mexico, Chile, Argentina, Panama, Bolivia, Germany, Italy, Holland, Austria, USA and England.

Nat Baldwin is a double bassist, composer, improviser, and songwriter from Maine, currently living in Western Mass. He's released several solo and collaborative works and runs the experimental music label Tripticks Tapes. His most recent releases include The Red Barn, an audio book with double bass accompaniment; Blind Field, a multitracked recording for double bass ensemble; AUTONOMIA I-III, a series of solo releases for double bass; and Common Currents, an EP of songs for bass and voice. His recordings have been featured on labels such as Confront, Dinzu Artefacts, Traced Objects, Shinkoyo, Dear Life, Western Vinyl, 577, and Industrial Coast, among others. A former member of Dirty Projectors, Baldwin has most recently performed and collaborated with Stella Silbert, E. Jason Gibbs, Anna Webber, Webb Crawford, Weston Olencki, and 23 Ensemble.